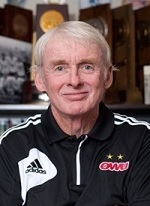 How broad is Ohio Wesleyan head coach Jay Martin's record of service to soccer? Come up with any combination of level (high school, college, professional) and function (player, coach, administrator), and he's probably done it.

Martin is the winningest coach in NCAA men's soccer history with a total of 708 wins.  He is the first men's soccer coach in any NCAA division to reach the 700-win mark.

Last year, the Bishops finished second in the North Coast Athletic Conference championship race with a 6-1-2 record and advanced to the championship game of the NCAC tournament on the way to a 13-4-2 overall mark.

In 2011, Martin guided Ohio Wesleyan to its second NCAA Division III national championship.  Along the way, the Bishops extended their unbeaten string in NCAC competition to a league-record 40 games.

Another peak in Martin's already-illustrious coaching career came when he guided the Battling Bishops to the 1998 NCAA Division III championship.

His teams have reached the NCAA Division III semifinals 9 times, finishing as national runner-up twice in addition to the 1998 and 2011 titles. They have brought home 12 regional titles, including 9 in the last 15 seasons that the NCAA tournament included a regional format. Ohio Wesleyan holds the NCAA Division III record with 40 playoff appearances and has recorded 62 playoff victories.

He has been the NCAA Regional Coach of the Year 16 times in his 42 years at Ohio Wesleyan and was named NSCAA national Coach of the Year in 1991, 1998, and 2011. In 2000, Martin received the Ohio Collegiate Soccer Association's Honor Award, only the fourth time that award was bestowed since the association’s founding in 1949. He received the National Soccer Coaches Association of America's Honor Award in 2007.

His lacrosse teams posted an 8-year record of 104-34, winning 4 Midwest Lacrosse Association titles, earning 6 NCAA playoff bids and twice making Martin the MLA Coach of the Year. And talk about developing individual talent -- in both sports, in 48 seasons, Martin has turned out 60 All-America and 207 All-Mideast or All-Midwest players.

Martin calls having fun the key. "Of course, to have fun you have to do your best," he adds, "and it helps to do so against the best competition." Hence, the Bishops' perennially ambitious schedules, liberally sprinkled with nationally-ranked opponents. He favors a skillful, ball-control game and rates his players as "first-class athletes and men."

Beyond coaching, Martin also has served soccer with a term as president of the National Soccer Coaches Association of America as well as a 6-year stint on the NCAA Division III selection committee, including 4 years as committee chair. He has been a color analyst of the Major League Soccer's Columbus Crew for 9 seasons. In addition, he took over as editor of the NSCAA's The Soccer Journal in January, 2003, becoming the publication's third editor since its establishment in 1950.

Martin is a professor in Ohio Wesleyan's physical education department and served as the Battling Bishops' athletics director from 1985-2004. During his 19 years as athletics director, Ohio Wesleyan intercollegiate athletics enjoyed unprecedented success. Ohio Wesleyan won a conference-record 6 consecutive NCAC all-sports championships from 1988-94. More recently, the Battling Bishops finished in the top 25 of the NACDA Directors Cup NCAA Division III standings in 6 of the last 8 academic years under Martin's leadership.

Prior to joining the Ohio Wesleyan faculty, Martin served as a 2-sport assistant at The Ohio State University, from which he received both M.A. and Ph.D. degrees. Earlier, he was director of sport at the Munich, Germany, YMCA, coaching soccer, volleyball, basketball and lacrosse; and athletics director at the American International School at Dusseldorf.

A native of Hingham, Mass., Martin received his B.A. degree from Springfield College in 1971. He lettered in soccer and lacrosse, earning All-America laurels in the latter. In Germany, he also played soccer for the Kaiserwerth Club, played professional basketball and served on the staff of the Volleyball Pavilion at the 1972 Olympics. 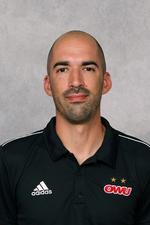 Matt Weiss is in his fifth season as an assistant men's soccer coach at Ohio Wesleyan University.

Weiss works with the Battling Bishop defense.  He helped the Bishops lower the team's goals-allowed and goals-allowed average in consecutive seasons, with the team allowing only 15 goals during the 2016 season.  Under Weiss, the Bishops have ranked among the top 2 defenses in the North Coast Athletic Conference each season and have garnered an NCAC Defensive Player of the Year and an NCAC Newcomer of the Year honoree.

Before coming to Ohio Wesleyan, Weiss coached at Olentangy High School for 6 seasons.  He was named Columbus Assistant Coach of the Year in 2010 and Ohio Capital Conference Coach of the Year in 2012.  During his time at Olentangy, the Braves recorded their highest win total ever in a 4-year span, set a program record for consecutive shutouts, and won their first-ever league championship.

Weiss is a 2008 graduate of Otterbein College.  He played 3 years for the Cardinals and graduated with a bachelor's degree in sports management.

He is a native of Worthington, Ohio. 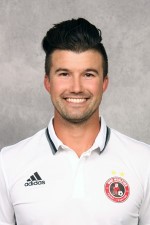 Drew Kaszubski is in his ninth season as an assistant men's soccer coach at Ohio Wesleyan University.

Kaszubski designs, implements, and administers all in-season and out-of-season performance development programs and works with the Ohio Wesleyan athletic training staff on injury prevention and rehabilitation. He is certified through the National Academy of Sports Medicine (NASM) as a Performance Enhancement and Corrective Exercise Specialist (PES, CES). Kaszubski's work with the men's program, which began in 2008, has significantly decreased the amount of range-of-motion injuries and the number of games missed.

He came to Ohio Wesleyan after coaching for 3 seasons at the club level with the Worthington Crew juniors.  Earlier, he spent one year teaching English and coaching soccer in Japan.

Kaszubski is a 2007 graduate of Ohio Wesleyan. He lettered 4 times as a midfielder for the Battling Bishop men's soccer team.

He is a native of Wyoming, Ohio.

He is a native of Wyoming, Ohio. 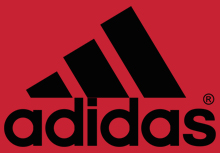